Montecassino where it was, as it was

The history of Montecassino begins around 529 when St. Benedict arrived and founded his monastery on the hilltop. A small church dedicated to St. Martin was built on the site of a pagan temple, corresponding to the cloister at the monastery’s current entrance. Further up the hill, where a pagan altar had been, a chapel was built in honor of St. John the Baptist.  St. Benedict and his sister Scholastica were buried here.

Today almost nothing remains from the foundation phase because of successive sieges and earthquakes. In 577, the Lombards destroyed the monastery and the monks took refuge in Rome. The Abbey was rebuilt around 718 but then ravaged by Saracens in 883. Starting from the 10th and 11th centuries, it rose again and became an institution of great economic and spiritual prestige.

In the Middle Ages, Montecassino was an intensely active cultural center: at the abbots’ behest, many books were copied in the scriptorium, including works by Classical authors. Without the monks’ patient transcriptions, many of those books would not have come down to us. The Abbey retains the oldest documents in vernacular Italian, precious illuminated manuscripts and rare books.

The most famous medieval abbot was undoubtedly Desiderius (future Pope Victor III) who promoted the abbey church’s reconstruction between 1066 and 1071. It was decorated with frescoes, marble panels, mosaics and precious furnishings, but later destroyed by an earthquake in 1349. After much reconstruction, in the early 18th century the Abbey assumed its Baroque character that was preserved until its destruction in 1944.

In 1866 the whole complex of Montecassino was declared a national monument: its material assets became patrimony of the Italian State, entrusted to the monks’ custody.

The territory of Cassino found itself along the Gustav Line, i.e. the German forces’ line of defense, in 1943 and witnessed battles that were decisive for the outcome of World War II.  Between February 15 and 18, 1944, Allied forces bombed the Abbey razing it to the ground.  Only the archives and library survived as they had been taken to safety before the bombings. 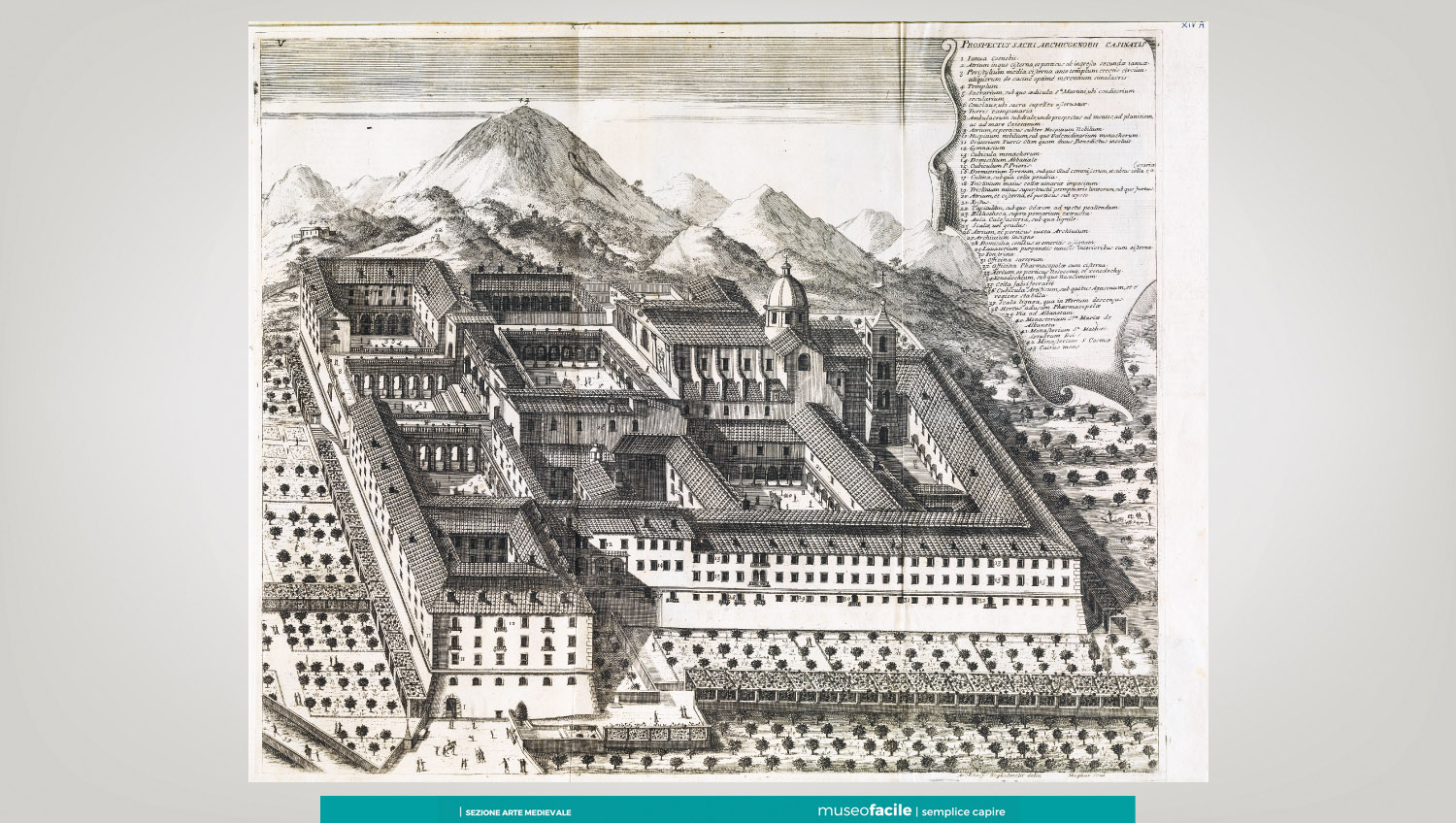 The Abbey of Montecassino in the 18th century (by E. Gattola, Historia Abbatiae Cassinensis, Venice 1733, I)