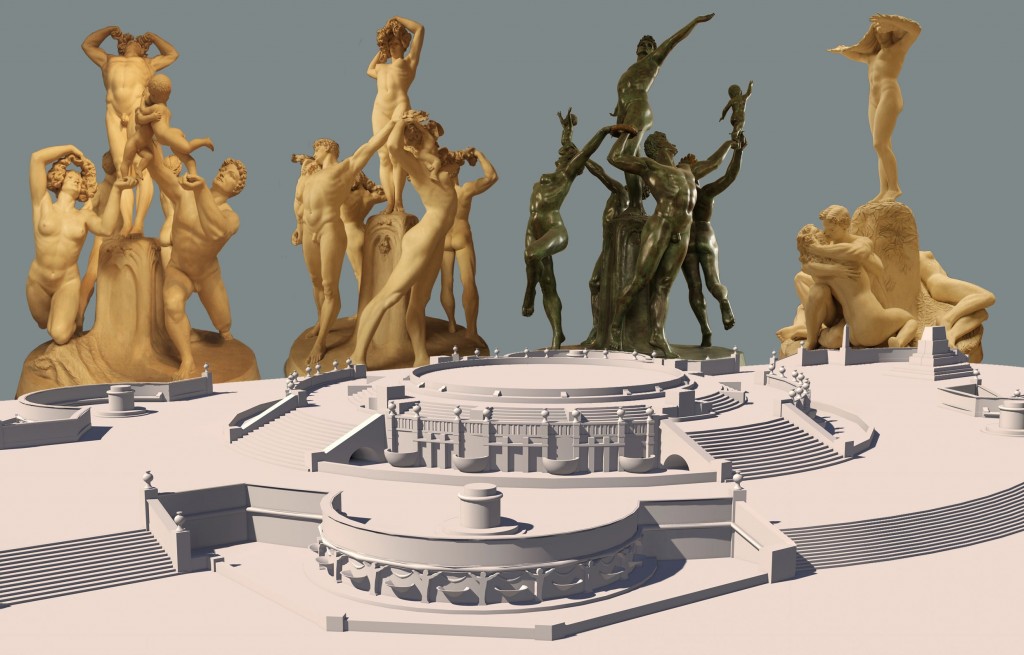 What are Morning, Evening, Day, and Night?

Morning, Evening, Day, and Night are 4 sculptural groups that were supposed to be set on the lower terrace of the Fountain of Life and symbolically mean the stages of life. Only plaster models have been made, with the exception of Day cast in bronze at the Fonderia Nelli, a foundry in Rome, and presented at the International Exposition of Rome in 1911.

What can you see in these works?

In Morning (A) you can see a man standing upon an elevation, his body slightly turned, looking into a new day. Above, a man and a woman lift two children up, symbols of the joy of living. On the opposite side, a man and a woman move forward holding hands. The statues are pointed towards Day, meaning a later stage in life.
Evening (B) is a group of five major statues set in a circle. Upon a central pedestal a standing woman is unfolding her hair. Further down, some of the figures hold their hands and look like dancing. A man is holding a sleeping baby. A woman and a man lift two children up together; another female figure, instead, is protecting a child with her hair and gets her arms open like wings.
Evening means the final stage of the day and symbolically, compared to the whole life, maturity. In particular, the female figure unfolding her hair in the middle recalls shadows that lie on the ground and anticipate night, namely the end of the day and life.
Day (C) is a large sculpture placed on a circular base. It is formed by two pairs of men and women dancing and lifting their children to heaven. The two couples are surrounding a male figure placed much higher up, on top of a high base. This standing figure has outstretched arms in a perfectly horizontal position. The group seems to perform a joyful dance, a symbol of hope and freedom.
Night (D) is again a work formed by a group of five statues: a woman standing in the center, with her long hair, resting on her arms outstretched, protecting a man and a woman embracing and kissing two other figures who are asleep. In this depiction Andersen represented protection and infinite love.

When were these works made?

The Fountain of Life