The Museum of Montecassino Abbey was opened to the public in 1980 on the occasion of the 15th centennial of St. Benedict’s birth.

Here are the steps that led to its creation.

In 1631 a substantial group of paintings was placed in the so-called “rooms of St. Benedict,” which were at the top of the ancient tower near the Abbey’s entrance.

At the end of the 18th century, with Napoleon’s confiscations, some of these paintings, along with other artworks were removed from the Abbey.

In 1879 the picture gallery was moved and reorganized close to the library in a space called “the fireside room” (aula calefactoria in the 18th century prints) because of its large fireplace. It was a meeting place for the monks.

In 1929, the exhibition “Mostra Cassinese dei cimeli antichi” was displayed here for the 14th centennial of Montecassino foundation and foretold the birth of the museum. The show included a selection of paintings, codices, incunabula, parchments, and archaeological finds that were to represent Montecassino’s art. It was kept until 1943.

Before bombings destroyed the Abbey on February 15, 1944, the book collection, archives and some of the art and archaeological objects were taken to safety.

After the war, monk and engineer Angelo Pantoni continued research activities begun before 1944 and helped to expand the archaeological collections. New acquisitions have followed suit in recent times thanks to the generosity of private individuals. These include the 2006 donation of The Nativity, a tondo attributed to Sandro Botticelli or his workshop.

In 2014, the National Monument of Montecassino Abbey and its museum joined Lazio’s Network of Museums that was created that same year.

The museum took on its current form in 2013 and has galleries located on different levels.  The Museum is accessed from the cloister in front of the abbey church.

The visitor moves along a path divided into sections following the main phases of the basilica’s history: from the age of Desiderius (Medieval Art Section) to the Baroque reconstruction (Modern Art Section) to 20th century archaeological finds (Archaeology Section).

The Medieval Art Section also includes the Cloister and Chapel of St. Anne. Two themed rooms are part of the Modern Art Section: one dedicated to The Nativity and the other to the iconography of St. Benedict.

A rich collection of prints and maps, on display in the hallway to the right of the Rooms of Desiderius, helps reconstruct the appearance of the monument and the abbey’s history.

The choral books and books of hours also occupy an important part of the museum and represent a precious part of the heritage preserved in the Abbey Archives.

The last section is dedicated to canonicals, church furnishings and ivories, the result of acquisitions and bequests over time. 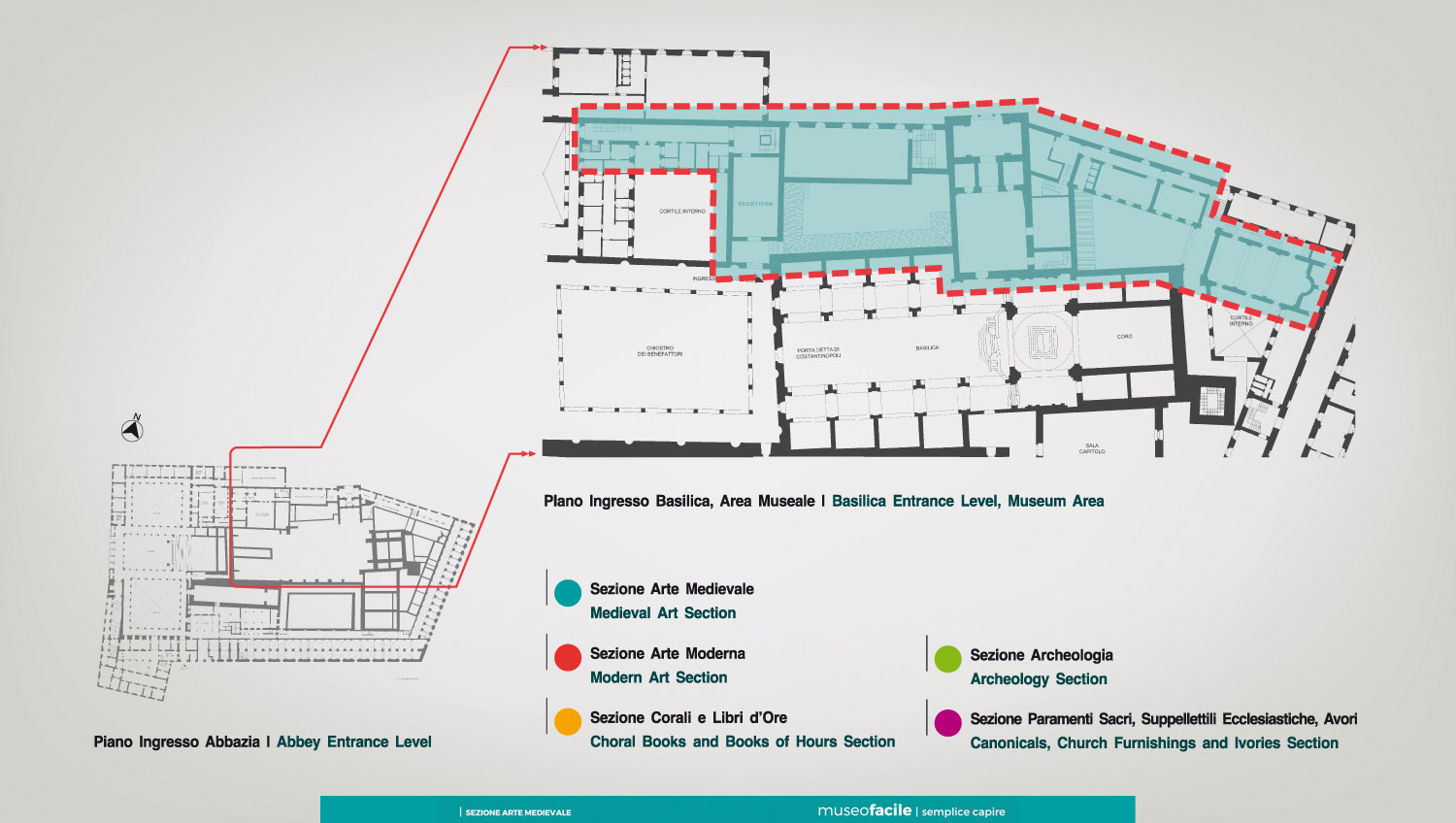