This itinerary is based on the early results of an articulated research program dedicated to the artistic heritage of Gaeta. It offers a guided tour through the streets and monuments in the oldest part of the city, leading the public in the discovery of ten particularly interesting paintings based on sacred subjects.

The itinerary opens with a visit to the ancient cathedral of the Assunta and to the sparkling “succorpo” or crypt of Saint Erasmus, a true masterpiece of the Latium baroque which, today as in the past, strikes the visitor for its refined marble inlays sculpted by the Neapolitan Dioniso Lazzari (1617-1689) and the touching paintings by the Roman Giacinto Brandi (1621-1691).

After a stop at the nearby Diocesan Museum, to admire the masterpieces of some of the greatest masters of Neapolitan painting such as Luca Giordano (1634-1705) and Francesco Solimena (1657-1747), we proceed to the Centro Storico Culturale which, in addition to an important collection of medieval works, houses numerous sixteenth and eighteenth century works. The tour ends with a visit to the beautiful church of the Annunziata and the fascinating Grotta d’Oro, which hosts the beautiful cycle of paintings by Giovan Filippo Criscuolo (1495-1570) and the devout Santissima Concezione by Scipione Pulzone (1540/1542-1598).

CATHEDRAL OF THE ASSUMPTION AND SAINTS MARCIAN AND HERASMUS, Via Duomo, 24

6 ∙ Francesco Solimena, Rest during the flight into Egypt

CHURCH OF THE ANNUNZIATA, Via Annunziata, 21 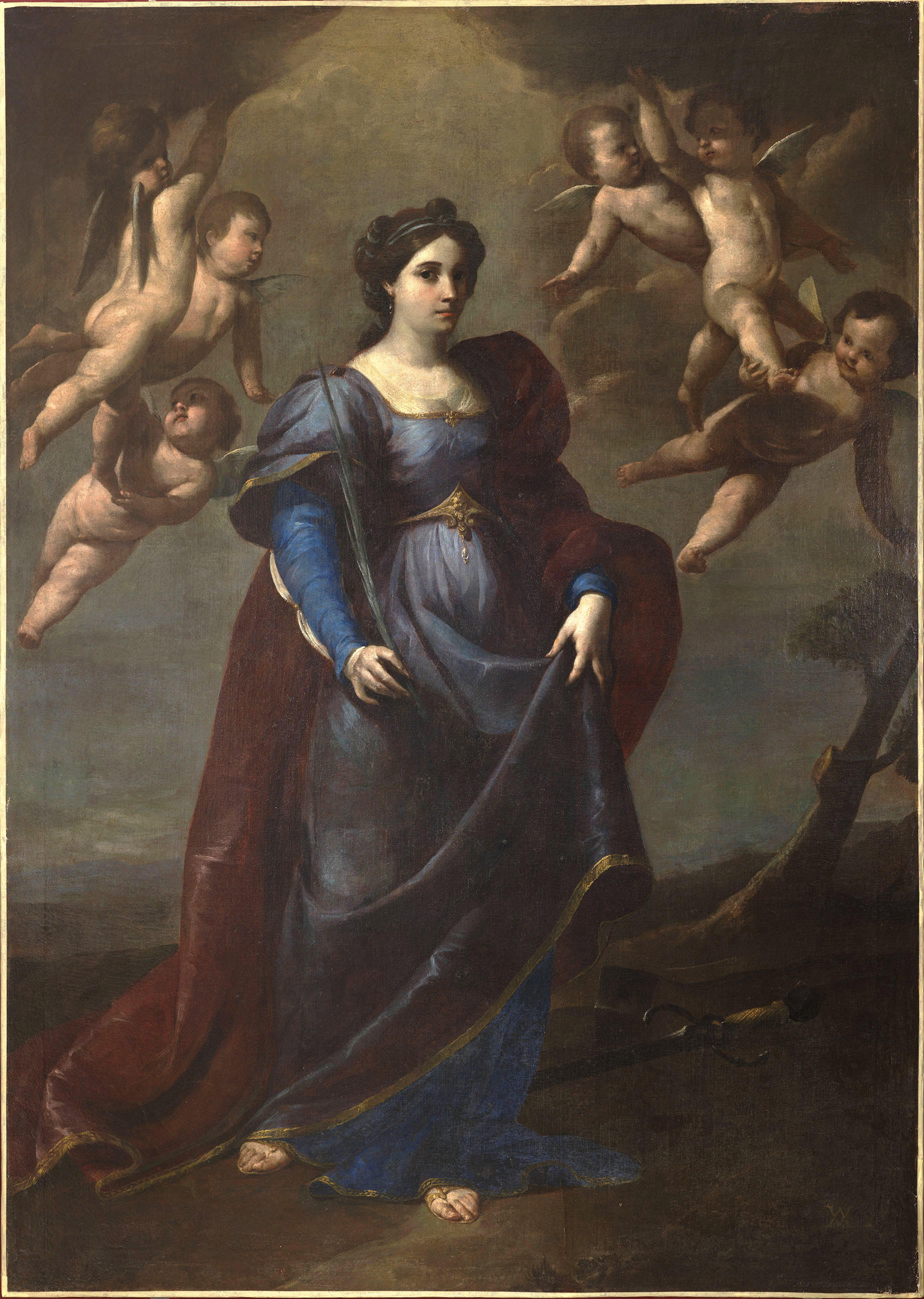 Originally placed in the church of the women’s monastery of Santa Caterina d’Alessandria in Gaeta, which welcomed the maidens of the best local aristocracy, the work belongs to the very last phase of the Neapolitan artist Andrea Vaccaro, blending the Roman-Emilian classicism in vogue in Naples, thanks to the influence of Massimo Stanzione, with his own primitive naturalist training. The saint is represented as a young woman of high rank intent on removing the clouds above her surrounded by a glory of angels , in which one discerns what is probably the hand of Andrea’s son Nicola Vaccaro.

This painting, which underwent radical restoration after being damaged during the war in 1943, is signed by Carlo Saraceni and can be approximately dated to the 1720s. Belonging to the group of large religious commissions by Carlo Saraceni, an artist who usually produced small-size works, it shows a certain stylistic discontinuity between the lower register, where the characters are explored with a keen sense of realism, and the upper register, still intimately mannerist in the clear architecture from which the group of bystanders looks out.

This altarpiece was realized as part of the decoration of the cathedral’s “succorpo” or crypt dedicated to Saint Erasmus, venerated by the population of Gaeta for having saved the town from the plague of 1656. In 1663, Giacinto Brandi agreed to the commission for 150 ducats and completed it within a year. The strongly naturalistic language lingers on the description of the gory details of the martyrdom, and the composition is typical of Brandi, with a crowd of characters in the foreground and no ambient details.

Our Lady of Silence 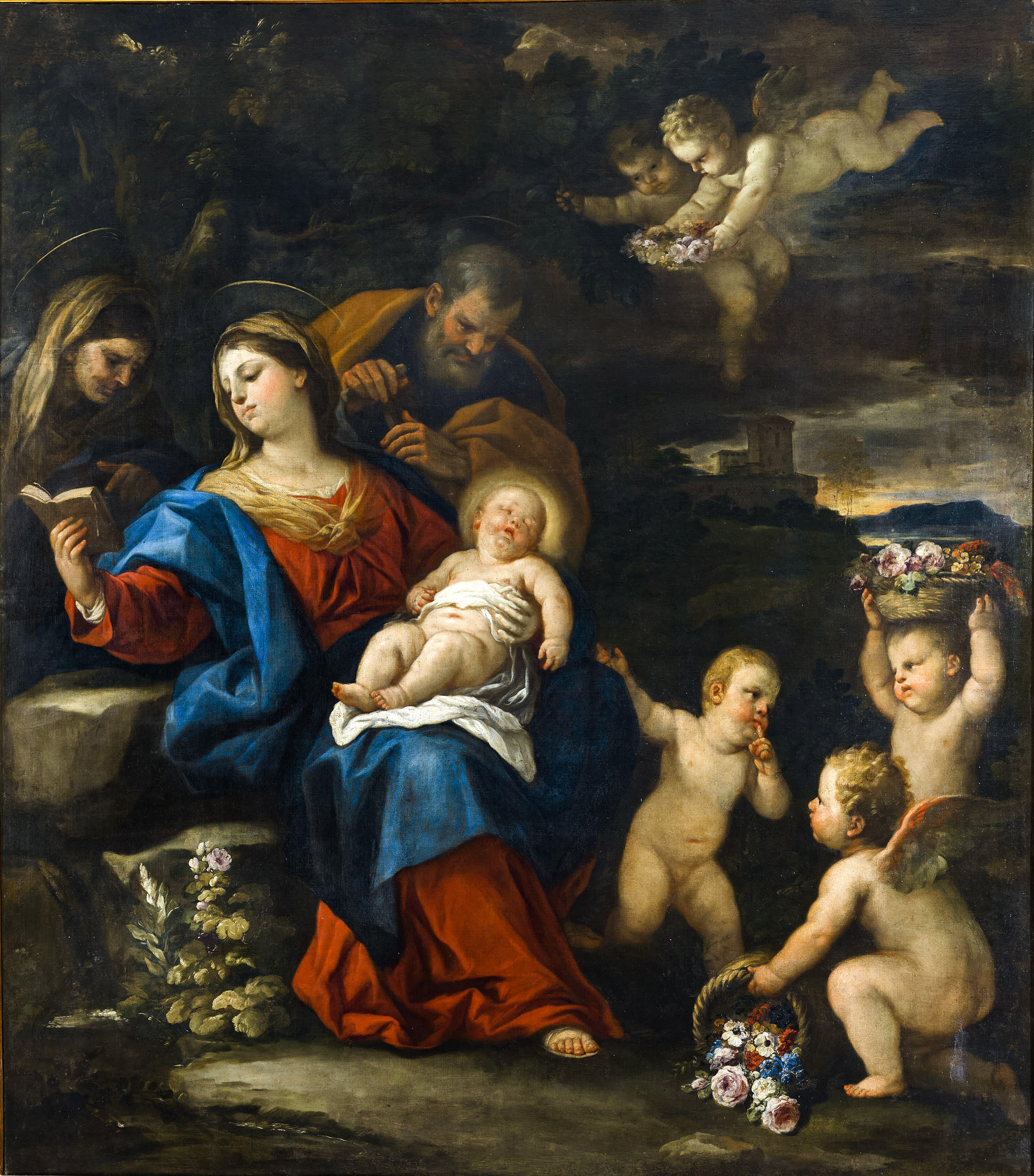 Arrived in 1853 from the Real Museo Borbonico for the decoration of the church of Santa Caterina d’Alessandria, this canvas can be traced back to Luca Giordano’s production of  the 1880s. Luca Giordano, as often in the course of his career, based the composition on an engraving, in this case by the Flemish artist Cornelis Galle the Elder, altering some of the details. The canvas depicts the Virgin reading with the sleeping Child in her arms, assuming the role  of “Silence”, suggested by the gesture of one of the three angels on the right. [CONTROLLARE: ]   The pastoral intonation and the greater compositional simplicity denote Luca Giordano’s incipient classicist inclination under the artistic influence of his contemporary Carlo Maratta. 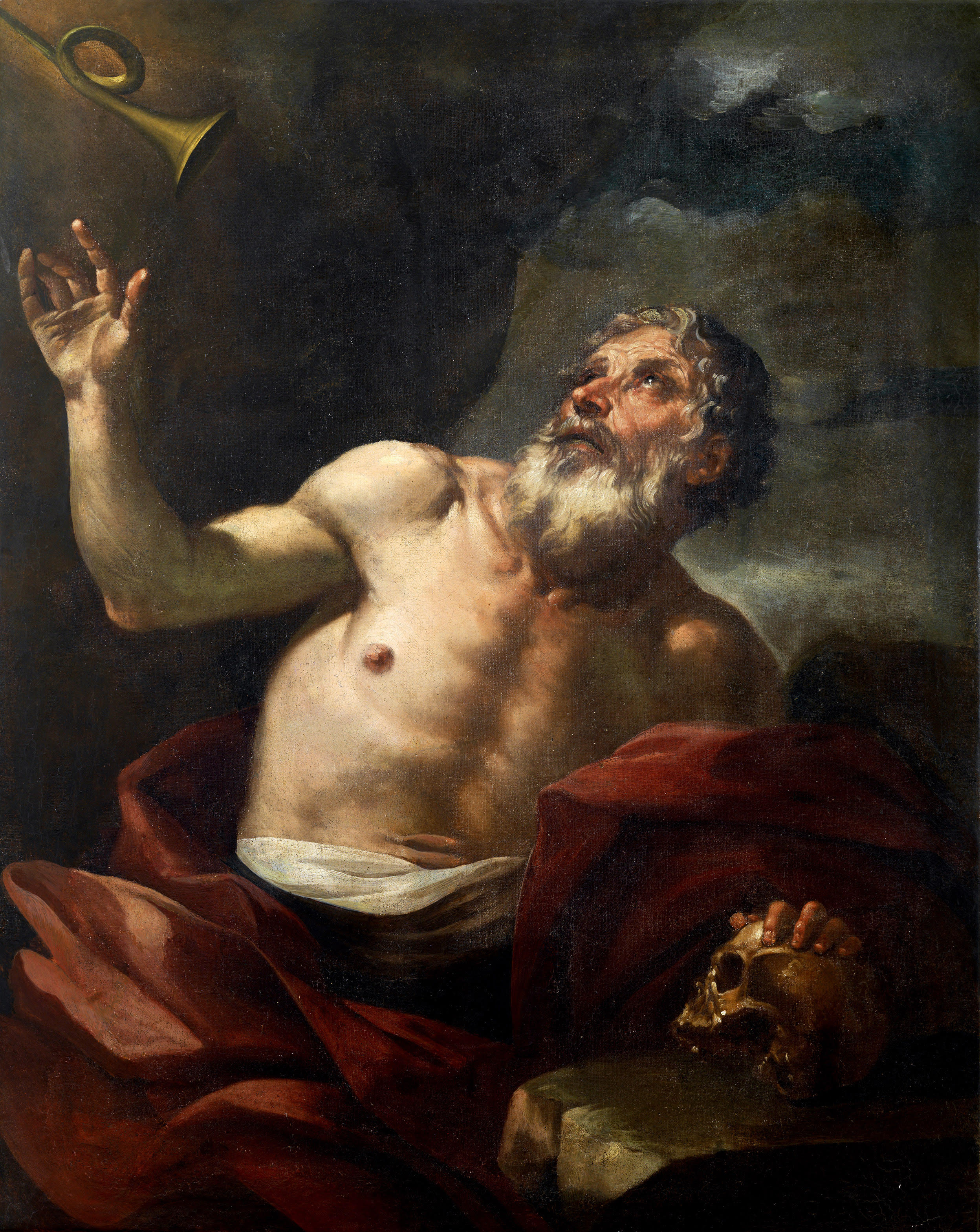 Coming from the Monastery of the Santa Trinità in Gaeta, the work probably dates from Giacinto Brandi’s stay in Gaeta in the second half of the 1760s. Taking up a fortunate compositional formula originally proposed by Jusepe de Ribera, Brandi here depicts the hermit saint in three-quarter view in a dramatic style with a vigorous chiaroscuro. The saint, wrapped in a fluttering but almost statuesque red cardinal’s cloak, looks upwards as the trumpet of Judgement sounds against a background of dark clouds.

Rest in the flight to Egypt

Donated in 1853 by King Ferdinand II from the Real Museo Borbonico for the decoration of the new church of San Francesco, it is an example of the youthful phase of Francesco Solimena, still visibly influenced by Luca Giordano, but with already incipient interests in the luminism of Mattia Preti. The dense and detailed exotic vegetation of the background against which the monumental figures of the Holy Family stand out recalls Luca Giordano’s Metamorphoses, while the shepherd on the right showing the way to St. Joseph is evidently a portrait, whose subject has not yet been precisely identified. 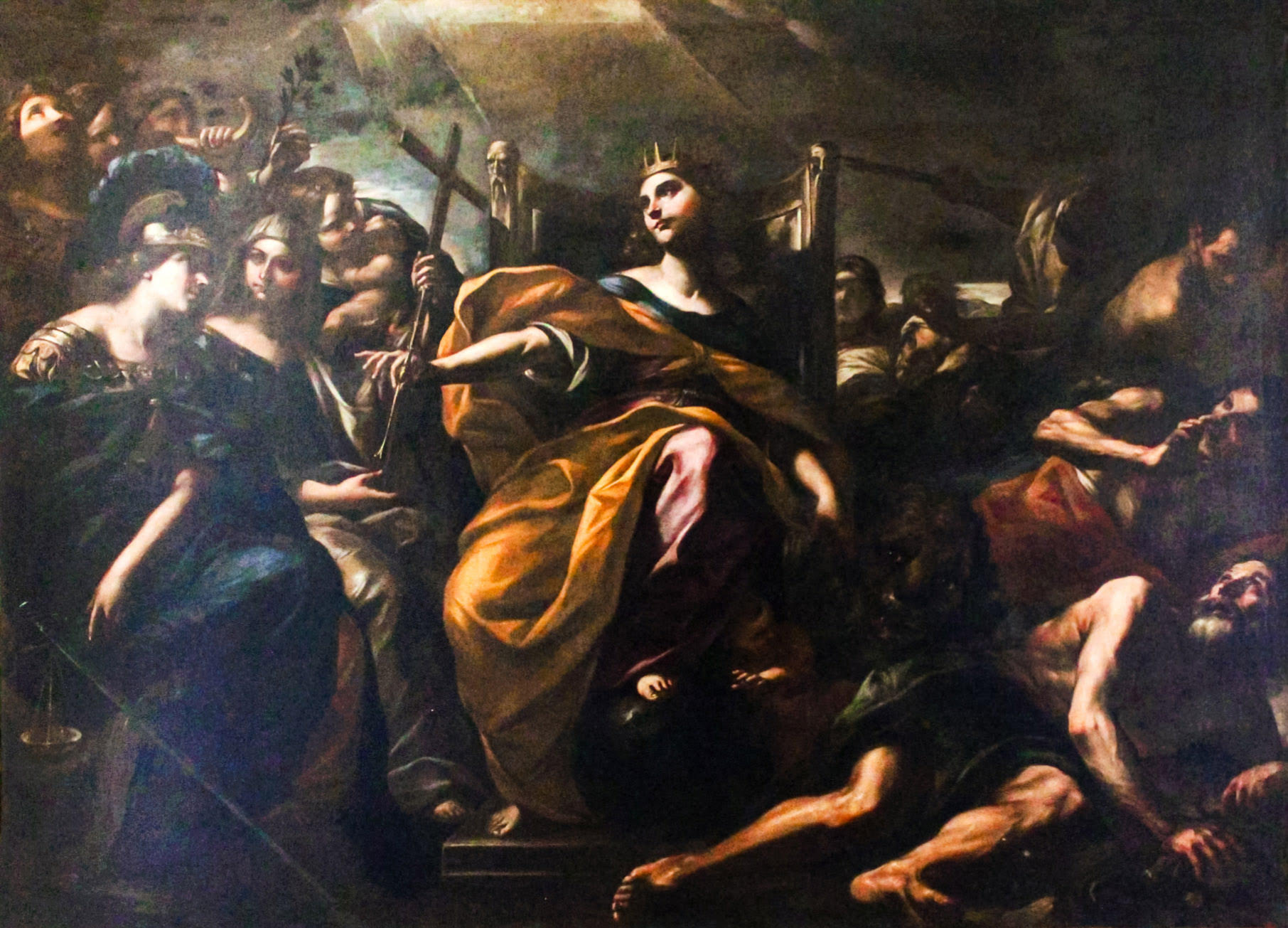 The allegorical work presents Fortitude in the centre, flanked on the side of the throne by a lion who looks towards the group of Virtues (Justice, Faith, Charity and Meekness), while on the left are the personifications of Sickness and Sin. The orchestration of the lights, with flashes and strong contrasts, emphasizes the naturalistic component inspired by the works of Mattia Preti, while the round full-bodied forms are reminiscent of Guercino. The painting was delivered from the storage magazines of the National Museum of Capodimonte (Naples) in 1938 as the work of an unknown Neapolitan artist to decorate the newly renovated church of San Domenico in Gaeta.  It was Mario Alberto Pavone who identified the author as Giovan Battista Beinaschi, dating it to the 1680s, when the artist was staying for the second stay in Naples.

Our Lady of Pilar 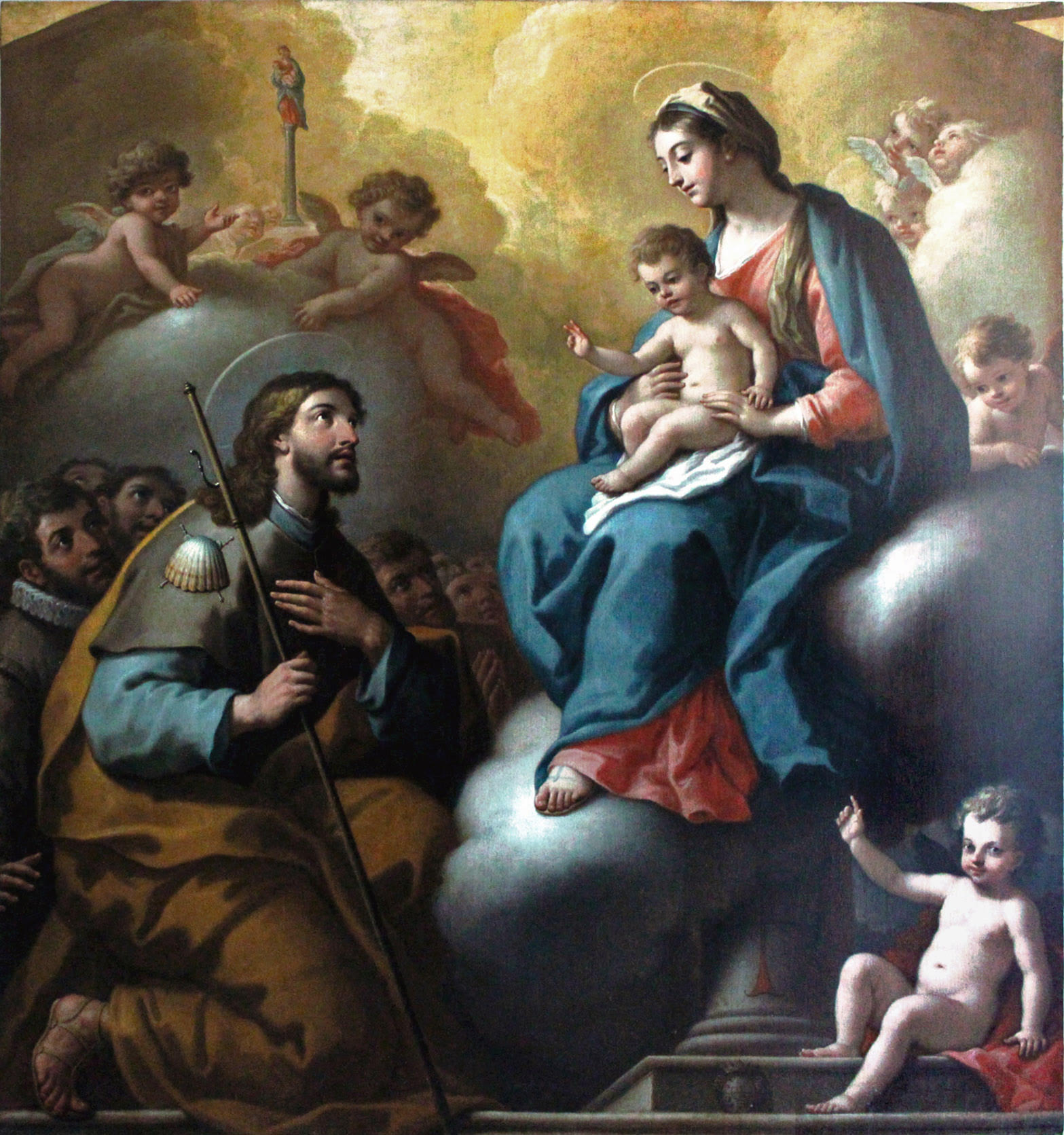 Originally belonging to the collector Alfredo Bourguignon, who donated it to the Museum of San Martino (Naples) in 1880, the painting was later placed in storage in the Museum of Capodimonte (Naples), from which it was transferred in 1938 to the newly renovated church of San Domenico in Gaeta.  The work is dated and signed by Paolo De Matteis, dating from the year of his return from France. It represents the “Madonna del Pilar,” the apparition of the Virgin standing on a pillar to Saint James, an episode very dear to the Spanish, who at the time controlled the Neapolitan kingdom. Clearly based on the compositional ideas of Luca Giordano, the work shows also the influence of Roman and French art, which led De Matteis towards a more transparent and classical style of painting.

9. Adoration of the shepherds

Gaeta, Church of the Santissima Annunziata, right side altar 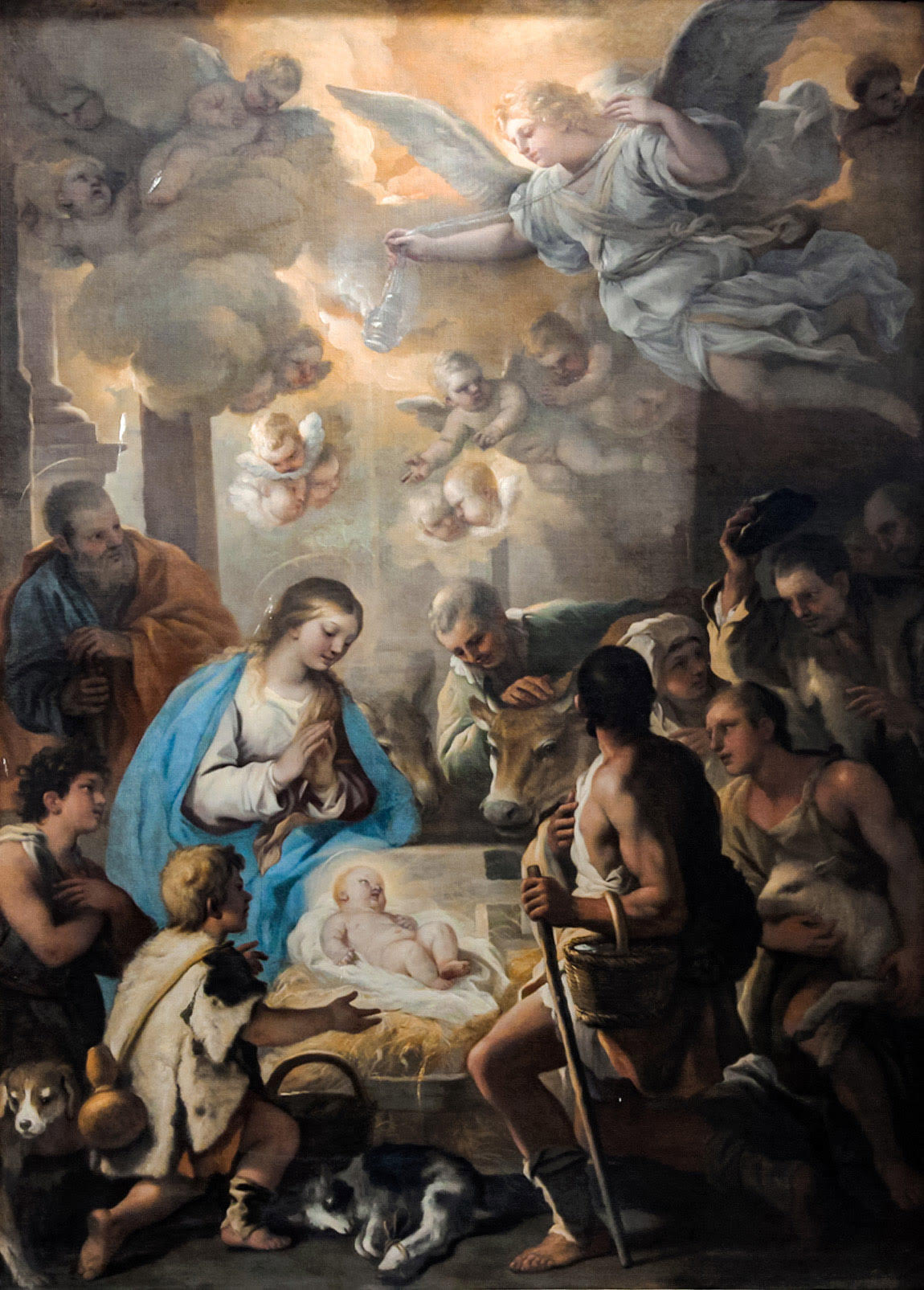 Gaeta, Church of the Santissima Annunziata, left side altar 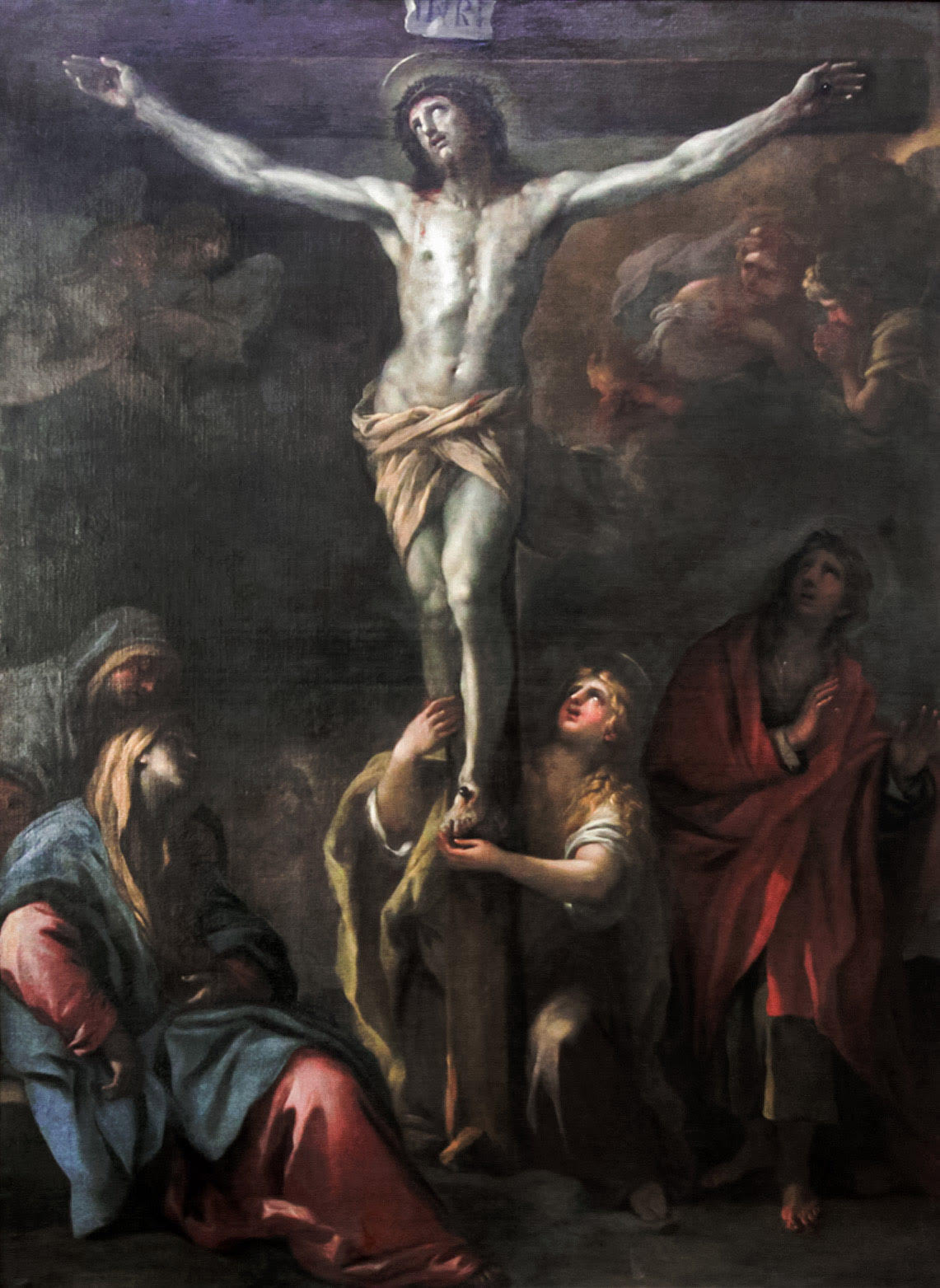 These two paintings were made by Luca Giordano in the late  1680s, immediately after the decoration of Palazzo Medici Riccardi in Florence and shortly before he left for Madrid, where he had been called by King Charles II to decorate the Escorial. Conceived as pendants, the two canvases are typical of Giordano’s style of the period, evident in the alternation of luminous visions and other more somber ones, and in the contrast between the spectacle of tenderness and the spectacle of death. In the Nativity of the Child, one perceives the influence of Guido Reni’s painting of the same name for the Certosa di San Martino in Naples [CONTROLLARE: ], though Giordano created a more dynamic atmosphere in which the dense choir of angels suggests a continuous flow of movement, in the style of Baciccio and Gian Lorenzo Bernini, while the colour anticipates the brilliance and transparency of 18th-century taste. In the Crucifixion, Giordano evokes Guido Reni, but adopting a more classical style, characterized by finer, more-polished physiognomies and a strong contrast between the livid forms in the foreground and the grey background, focusing the attention on the dramatic quality of the event and on the expressiveness of the few characters present.

From the Castle to the City. Cultural itineraries